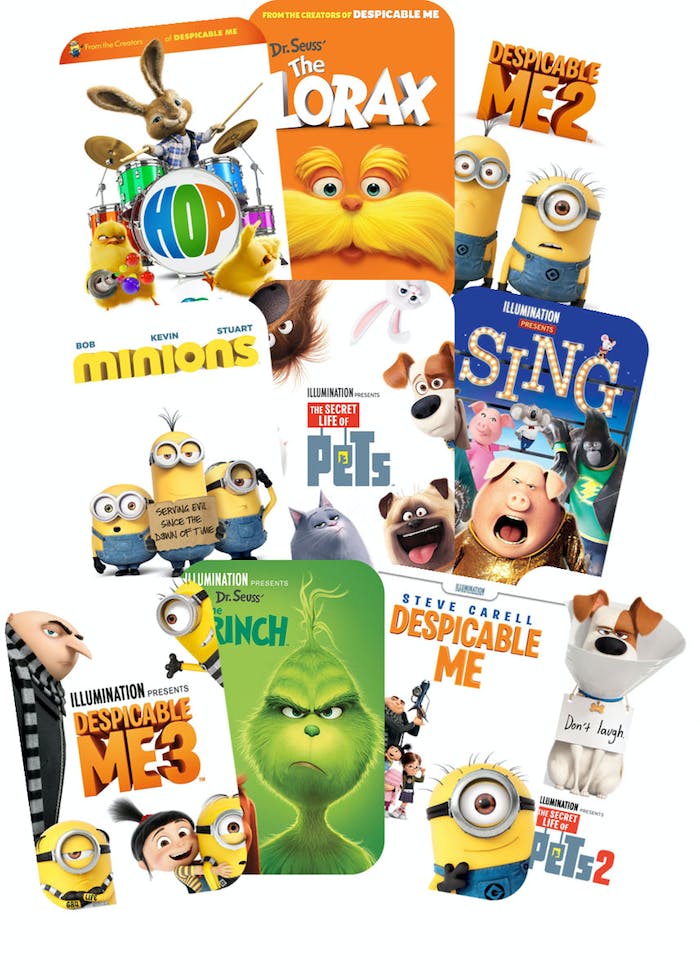 ination presents all ten of their blockbuster comedies in one collection for the whole family. Includes all three Despicable Me films, Secret Life of Pets 1 & 2, Hop, Minions, Sing, The Lorax, and The Grinch!

From the creators of Despicable Me comes an all-new comedy about candy, chicks and rock ‘n’ roll! He was destined to be the Easter Bunny, but all he wanted to do was rock! When teenage E.B. (voiced by Russell Brand) leaves for Hollywood in pursuit of his dream to become a rock star drummer, he meets Fred (James Marsden), an out-of-work slacker with his own lofty goals. Together the two encounter a series of hilarious mishaps and misadventures and in the end help each other recognize the importance of family. “The laughs don’t stop in this movie treat for all ages!” — Pete Hammond, BOXOFFICE
© 2011 Universal Studios. All Rights Reserved.

The imaginative world of Dr. Seuss comes to life like never before in this visually spectacular adventure from the creators of Despicable Me! Twelve-year-old Ted will do anything to find a real live Truffula Tree in order to impress the girl of his dreams. As he embarks on his journey, Ted discovers the incredible story of the Lorax, a grumpy but charming creature who speaks for the trees. Featuring the voice talents of Danny DeVito, Ed Helms, Zac Efron, Taylor Swift, Rob Riggle, Jenny Slate, and Betty White, Dr. Seuss’ The Lorax is filled with hilarious fun for everyone!
© 2012 Universal Studios. All Rights Reserved.

The Secret Life of Pets

Louis C.K., Eric Stonestreet, and Kevin Hart lend their voice talents to this action/adventure comedy taking a hilarious look into the lives of Pets. Set in a Manhattan apartment building, pets gather to start their day as the two-legged residents head for work and school. The head hound is a quick-witted terrier rescue, whose position at the epicenter of his master's universe is suddenly threatened when she comes home with Duke, a sloppy mongrel with no polish. The two soon find themselves on the mean streets of New York, where they meet the adorable white bunny Snowball. It turns out that Snowball is the leader of an army of pets that were abandoned and are determined to get back at humanity and every owner-loving pet. The dogs must thwart this plot and make it back in time for dinner.
© 2016 Universal Studios. All Rights Reserved.

Illumination and Universal Pictures present The Grinch, based on Dr. Seuss' beloved classic. The Grinch tells the story of a cynical grump who goes on a mission to steal Christmas, only to have his heart changed by a young girl's generous spirit. Funny, heartwarming and visually stunning, The Grinch is fun for the whole family!
© 2018 Universal Studios. All Rights Reserved.

The Secret Life of Pets 2 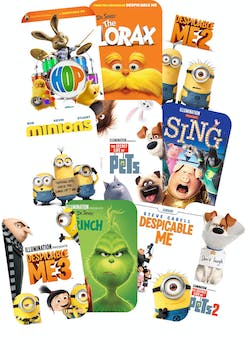