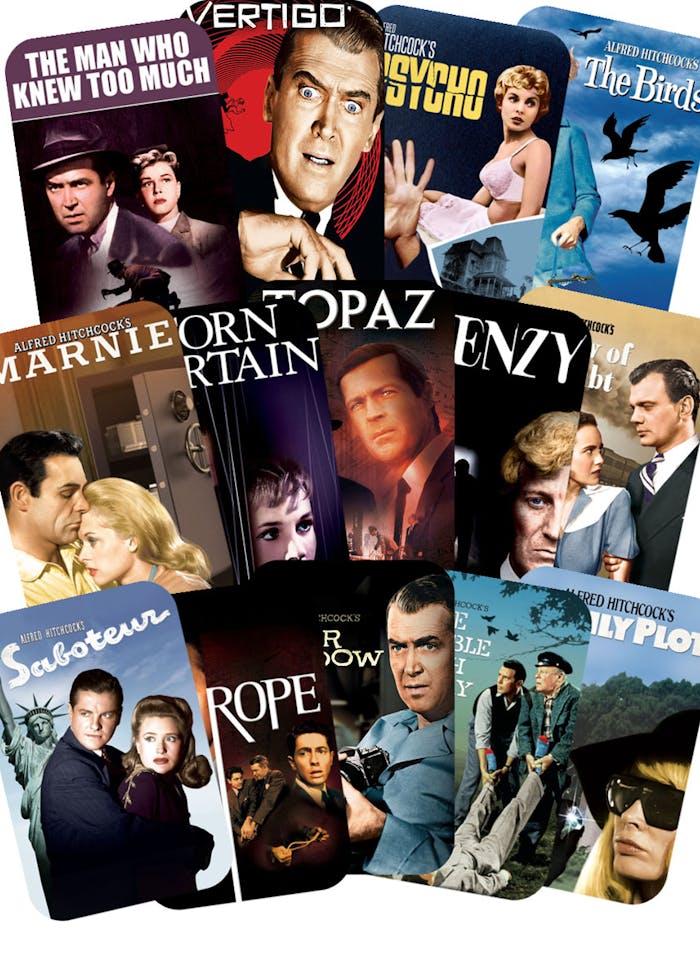 Universally recognized as the Master of Suspense, the legendary Alfred Hitchcock directed some of cinema’s most thrilling classics. Featuring 14 iconic films from his illustrious career including Psycho, Vertigo, The Birds and Rear Window.

Shadow of a Doubt

Joseph Cotton star as Uncle Charlie, a calculating and charming killer who hides out in his relatives' small hometown. There, he befriends his favorite niece and namesake, Young Charlie (Teresa Wright). But she begins to suspect he may be the famed Merry Widow murderer. A deadly game of cat and mouse ensues as the psychopathic killer plots the death of his young niece to protect his secret.
© 1942 Universal Studios. All Rights Reserved.

This riveting wartime thriller stars Robert Cummings as Barry Kane, a Los Angeles aircraft factory worker who witnesses a Nazi agent firebombing his plant. However, it is Barry who is accused of the fiery sabotage, and to clear his name he sets off on a desperate, action-packed cross-country chase that takes him from Boulder Dam to New York's Radio City Music Hall to the top of the Statue of Liberty. Hitchcock's first film with an all-American cast moves with breakneck speed toward its final heart-pounding confrontation and it remains a suspense classic.
© 1942 Universal Studios. All Rights Reserved.

James Stewart, Farley Granger and John Dall star in this macabre spellbinder, which was inspired by a real-life case of murder. Two thrill-seeking friends (Granger and Dall) strangle a classmate and then hold a party for their victim's family and friends, serving refreshments on a buffet table fashioned from a trunk containing the lifeless body. When dinner conversation revolves around talk of the 'perfect murder', their former teacher (Stewart) becomes increasingly suspicious that his students have turned his intellectual theories into brutal reality.
© 1948 Universal Studios. All Rights Reserved.

Directed by the Master of Suspense, Alfred Hitchcock's Rear Window is an edge-of-your-seat classic starring two of Hollywood's most popular stars. When a professional photographer (James Stewart) is confined to a wheelchair with a broken leg, he becomes obsessed with watching the private dramas of his neighbors play out across the courtyard. When he suspects his neighbor of murdering his nagging wife, he enlists his socialite girlfriend (Grace Kelly) to help investigate the suspicious chain of events, leading to one of the most memorable and gripping endings in all of film history. Honored in AFI's 100 Years ... 100 Movies for excellence in film, Rear Window has also been hailed as "one of Alfred Hitchcock's most stylish thrillers" (Leonard Maltin's Classic Movie Guide).
© 1954 Patron, Inc. Renewed 1982 Samuel Taylor & Patricia Hitchcock O'Connell, as Co-Trustees. All R

The Trouble with Harry

Academy Award winner Edmund Gwenn, John Forsythe, Mildred Natwick and Jerry Mathers star in this charming comedy mystery. The trouble with Harry is that he's dead, and while no one really minds, everyone feels responsible. Academy Award winner Shirley MacLaine makes her screen debut in this New England romp that includes romance, humor...and several unearthings of the corpse. In The Trouble with Harry, the Master of Suspense proves the range of his genius with a decidedly different work.
© 1955 Samuel Taylor and Patricia Hitchcock O'Connell as Co-Trustees. All Rights Reserved.

The Man Who Knew Too Much

James Stewart and Doris Day give magnificent performances as Ben and Jo McKenna, an American couple vacationing in Morocco, whose son is kidnapped and taken to England. Caught up in international espionage, the McKennas' lives hang in the balance as they race to save their son in the chilling, climactic showdown in London's famous Royal Albert Hall.
© 1955 Universal Studios. All Rights Reserved.

Considered by many to be director Alfred Hitchcock's greatest achievement, Leonard Maltin gives Vertigo four stars, hailing it as "A genuinely great motion picture." Set among San Francisco's renown landmarks, James Stewart is brilliant as Scottie Ferguson, an acrophobic detective hired to shadow a friend's suicidal wife, Madeleine (Kim Novak). After he saves her from drowning in the bay, Scottie's interest shifts from business to fascination with the icy, alluring blonde. When he finds another woman remarkably like his lost love, the now obsessed detective must unravel the secrets of the past to find the key to his future.
© 2008 Universal Studios. All Rights Reserved.

One of the most shocking films of all time, Alfred Hitchcock's Psycho changed the thriller genre forever. Join the Master of Suspense on a chilling journey as an unsuspecting victim (Janet Leigh) visits the Bates Motel and falls prey to one of cinema's' most notorious psychopaths - Norman Bates (Anthony Perkins). Named #1 on the AFI's 100 Years...100 Thrills list, this notorious film has become a cultural phenomenon. Featuring one of the most iconic scenes in film history - the famous "shower scene", Psycho is "still terrifying after all these years" (Leonard Maltin's Classic Movie Guide).
© 1960 Shamley Productions, Inc. All Rights Reserved.

Nothing equals The Birds for sheer terror when Alfred Hitchcock unleashes his foul friends in one of his most shocking and memorable masterpieces. As beautiful blonde Melanie Daniels (Tippi Hedren) rolls into Bodega Bay in pursuit of eligible bachelor Mitch Brenner (Rod Taylor), she is inexplicably attacked by a seagull. Suddenly thousands of birds are flocking into town, preying on schoolchildren and residents in a terrifying series of attacks. Soon Mitch and Melanie are fighting for their lives against a deadly force that can't be explained and can't be stopped in one of Hollywood's most horrific films of nature gone berserk.
© 1963 Universal Studios. Renewed 1991 Universal Studios. All Rights Reserved.

Hitchcock creates a masterful psychological thriller about a compulsive liar and thief (Tippi Hedren), who winds up marrying the very man (Sean Connery) she attempts to rob. When a terrible accident pushes her over the edge, her husband struggles to help her face her demons as the plot races to an inescapable conclusion.
© 1964 Geoffrey Stanley, Inc. All Rights Reserved.

World-famous scientist Michael Armstrong (Paul Newman) and his fiancee/assistant, Sarah Sherman (Julie Andrews), travel to Copenhagen for a physics conference. When Sarah mistakenly intercepts a message meant for Armstrong, she believes that he is secretly defecting to East Germany. Or is he? As Armstrong goes undercover to glean top-secret information, the couple find themselves running for their lives from enemy agents in this action-packed thriller.
© 1966 Universal Studios. All Rights Reserved.

The best-selling spy novel bursts onto the screen in this riveting story of adventure and international intrigue. John Forsythe stars as an American CIA agent who hires a French operative (Frederick Stafford) to travel to Cuba and investigate rumors of Russian missiles and Topaz, a NATO spy. The inquiry soon spins into a life-threatening escapade of espionage, betrayal and murder.
© 1969 Universal Studios. All Rights Reserved.

Jon Finch, Alec McCowen and Barry Foster star in this morbid blend of horror and wit-the first Hitchcock film to earn an 'R' rating. The Necktie Murderer has the London Police on red alert, and an innocent man is on a desperate quest to find the real serial rapist-murderer and clear his own name. Alternating heart-pounding tension with distinctive Hitchcock humor, Frenzy marked the Master of Suspense's return to his native England after almost twenty years. 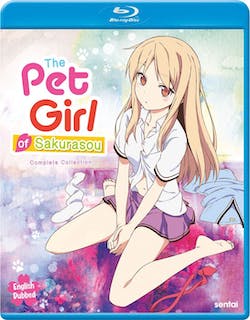 The Pet Girl of Sakurasou: The Complete Collection [Blu-ray] 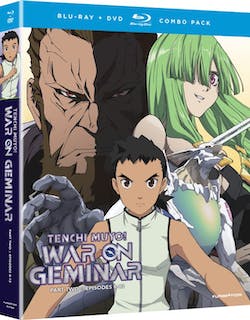 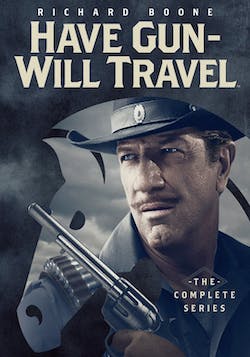 Have Gun Will Travel: The Complete Series [DVD] 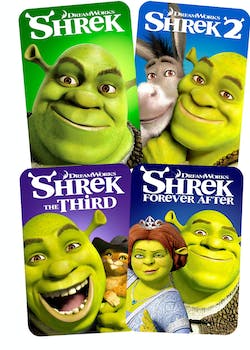 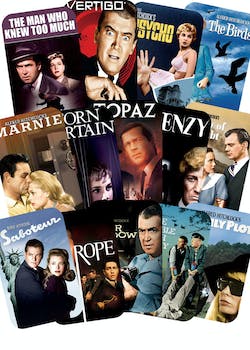