Meet the Parents, Meet the Fockers and Little Fockers bring you into the "circle of trust" of a heartwarming and hilarious cast of characters, including male nurse Greg Focker (Ben Stiller), his eccentric but lovable parents (Dustin Hoffman and Barbra Streisand), and ex-CIA operative Jack Byrnes (Robert De Niro).

Male nurse Greg Focker (Ben Stiller) is poised to propose to his girlfriend Pam (Teri Polo) during a weekend stay at her parents' home. But here's the catch... he needs to ask her father first. Alas, the fur flies as Jack Byrnes, Pam's cat-crazy, ex-CIA father, played hysterically by Academy Award winner Robert De Niro, takes an immediate dislike to her less-than-truthful beau. Greg's quest for approval gets seriously sidetracked as Murphy's Law takes over an d a hilarious string of mishaps turns him into a master of disaster and total pariah in the eyes of the entire family... all except his shell-shocked girlfriend, who can't believe she still loves her one-man wrecking crew. Meet the Parents, from the director of Austin Powers, is an uproarious blockbuster hit that bombards you with one laugh after another, as true love tries to conquer all, against all odds.
© 2000 Universal Studios. All Rights Reserved.

Greg Focker (Ben Stiller) has finally begun to earn the respect of his ex-CIA father-in-law, Jack Byrnes (Robert De Niro) but one important test still lies ahead: will Greg prove that he has what it takes to be the family's next "Godfocker" ... or will the circle of trust be broken for good? Returning co-stars Owen Wilson, Blythe Danner, Teri Polo, Dustin Hoffman and Barbra Streisand are joined by newcomers Jessica Alba, Laura Dern and Harvey Keitel in this hysterical family affair.
© 2010 Universal Studios. All Rights Reserved. 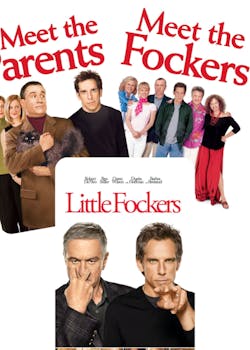